During it’s time, the Ythan Raft Race was the largest assembled Raft Race in Europe, often attracting well over 200 teams who competed for a range of coveted prizes and trophies. The Annual event ran without a break for 22 years and the impeccable organisational arrangements were overseen by Bill Smith, an inspirational art teacher from Ellon Academy in Aberdeenshire.
The River Ythan flows through the town of Ellon as it wends its way to the North Sea via the Newburgh estuary. The course of the race ran approximately 5 miles from the bridge in the town centre of Ellon to the bridge at Logie Buchan.
During the 22 years the race was held, Lodge St. Olaf were represented 10 times, and became the crew to beat in the categories for the most creative raft design. It’s just as well they put their efforts into building a raft that could win prizes for it’s looks, as they were never in the running to win any awards for their speed. Always at the tail end of the race, their most memorable defeat was the year the finished in second last place, only narrowly beating the local girl guides!

During their 10 year reign as kings of the Ythan, the crew changed from year to year with dozens of St. Olaf men helping to build the profile of freemasonry in the community, and creating a fine example of how the fraternity can integrate and enhance community activities in a significant way.
The themes for the raft design were wide and varied, from their first outing in a Mississippi Paddle steamer then through various other sea bound themes including a Chinese Junk, a Peterhead fishing trawler and Noah’s Ark. Other successful themes included a representation of Slains Castle, with the crew turned out in vampire costumes etc. Thunderbird 4 created quite a stir with the crew members then in full thunderbird costume.

The raft race only continued for another couple of years after Lodge St. Olaf hung up it’s paddles, I’m sure the two events were entirely unconnected. The reality was that those crew members who had taken part over the period were finding the additional 10 years did make a considerable difference to the stamina levels, fitness aside, after winning our coveted trophy 10 years in a row, we felt it was a good time to quit, while we were still ahead so to speak, the only time we could ever quit the raft race whilst ahead!
It should also be mentioned that our coveted prize was in fact a trophy donated by the Lodge to be presented to the best decorated raft in memory of one of our former crew members Bill Stewart who was sadly taken from us at the young age of 36 years. The pride the lodge took in competing for that trophy never faltered, and the pleasure of seeing it hung back on it’s hook in the lodge rooms year after year was enjoyed by the whole lodge. The raft race as an event ceased in 1997 after which organiser Bill Smith donated the coveted Bill Stewart Trophy to the Lodge where it hangs on its hook to this very day. Check out our Raft Race Roll of Honour.

The Spirit of St Olaf The Spirit of St. Olaf raft marked the final outing of the lodge in the Ythan Raft Race. It was the summer of 1995 and the Lodge entries had won top prizes in each of the 9 previous years. This year however was to prove to be something quite...

A Man Called Horace The Lodge has been fortunate over the years to have had a number of entertainers amongst their numbers, during the early 90’s Lodge members Jim Gardiner and Gordon Mackay had a novelty band who performed under the name “A Man Called Horace”. The...

The Ythan Raft Races were always an enjoyable outing for lodge members and family but the lead-up to the day often provided as much fun and laughter as the event itself. During the lead-up to the event, the lodge would often issue humorous press releases to the….

The Booze Brothers Perhaps the Lodges most memorable entry was the year they took on the guise of the “Booze Brothers” based very closely on the cult film the “Blues Brothers” the crew built a full sized replica of the police American police car featured in the film,...

Thunderbirds In 1991 the crew turned back to a nautical theme, this time masquerading as Thunderbirds, with the underwater Thunderbird 4 as the centrepiece of their prize-winning entry, much of the fun and games were captured on video by roving cameraman PM…

Slains Castle 1999 Saw the boys from St. Olaf move away from the nautical themes which had been their chosen genre up until now. Their home village of Cruden Bay saw local residents up in arms with a development company who were looking to develop the site formally...

Noah's Ark In 1989 the Lodge entered the Ythan Raft Race with their representation of Noah’s Ark. Plenty going on in this video including the pre race door to door collection round Cruden Bay. Result: The Winner of the Most Attractive Raft Crew Gordon Mackay Tom... 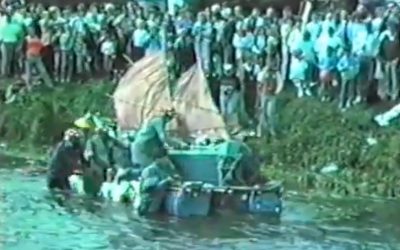 Chinese Junk In 1988 were back at sea and once again flying in the face of political correctness with their representation of a Chinese Junk. Spectacular in its detail with a hand-painted figure head which is still on display in the lodge temple.  Result: The Winner...

The Trawler For the most part, the Lodges entries were of a seafaring nature, hardly surprising that for their second outing the Lodge would draw its inspiration from its local communities and settled on a magnificently detailed Peterhead fishing trawler. Result: The...

The Mississippi Paddle Steamer 1986 saw Lodge St Olaf make it’s first tentative steps towards Raft Race History, the 8 man crew could not have known that their first successful outing would claim  the first of 10 major awards for creative design. Year by year the...